The cold heir of warm and bright Riven, Eirlys Argol (though she prefers to go by her mother's maiden name, Yates) is not only the princess of the Land of Advancement, but also a commander of its armies -- the first in the Argol line to take an active hand in Riven's military matters beyond a token presence. Enlisting in disguise at a young age, the young Eirlys rose rapidly through the military ranks before her parents discovered her secret. Though disappointed, they allowed Eirlys to continue her martial training, and she was eventually given command of a squadron that has since become one of the country's most elite fighters.

Despite her aptitude for military command, however, it is highly likely that she will eventually be forced out of the military to take the throne. This has caused a rift in the relations of the royal family, as Eirlys is decidedly uncomfortable with the idea of leading a country as opposed to a military unit. 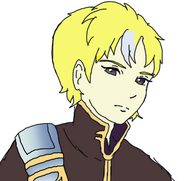 Eirlys by Teza
Community content is available under CC-BY-SA unless otherwise noted.
Advertisement